I was born in Maidstone, Kent and always knew from a very young age that I wanted to be an actor. I had my moments of doubt, like everyone does, when I thought it was an impossible dream, and initially started out trying to make it in the world of children’s tv presenting. I soon realised acting was my first love and that I simply couldn’t relinquish my dream and so this where I really committed to my career choice.

I have always been a huge Katharine Hepburn fan; her determination and strength of character being particularly admirable qualities. Soon after leaving university, I decided to write to her telling her about my career plans and how much of an influence she had been on me; I wasn’t really expecting a reply as apparently she very rarely signed responses to fan letters. However, I was so delighted to get her short reply, ‘Thank you for your sweet letter and your enthusiasm- Good luck to you.‘ with her own shaky hand written signature on the bottom! This letter I framed along with some photographs of her and takes pride of place in my kitchen. 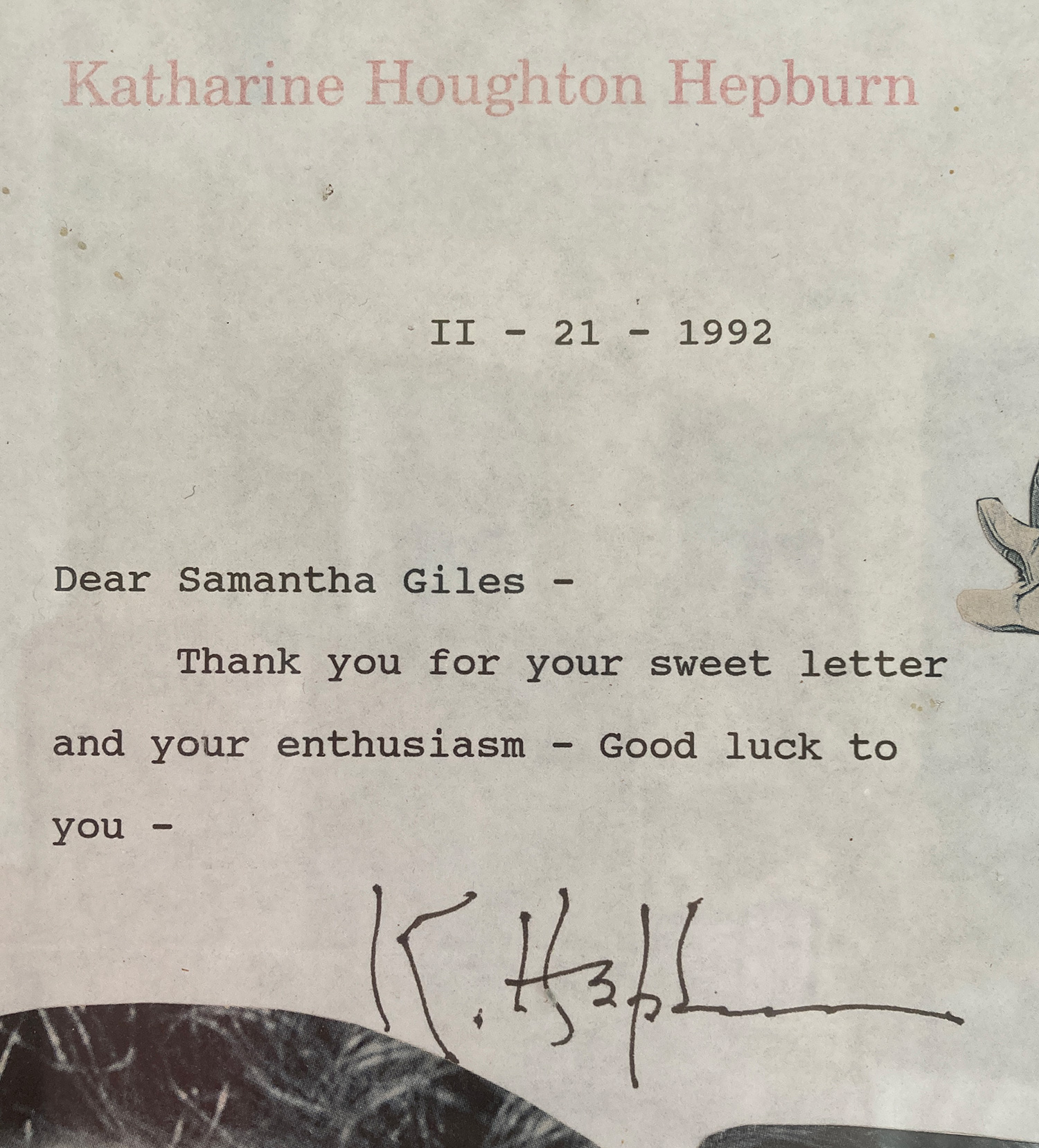 This has always spurred me on, when I’ve had periods out of work or felt like giving up, and believe me, over the years there have been many times when I’ve wondered if I could carry on! I did a number of different jobs in my 20’s to make ends meet; always being upfront with employers so that they knew I was an actor who was just doing other work to pay the bills. Some of my many jobs included: cleaning, ironing, waitressing, auxiliary nursing, life drawing model, data inputter. I did a week long crash course in touch typing, (god that was one of the best things I’ve ever done! So useful now with my writing!), in order to be able to get temping work in London which was better paid. Some of the temping work included; working for Habitat customer relations, reception work for accountancy firms and advertising agents. You name it, I did it!

My first acting job was on Coronation Street, just one episode, but it was a year later, when I did a film with Rob Lowe that I thought my big break had come! Sadly not, although it was a wonderful experience. It was my 4 episodes as Bernice Blackstock in Emmerdale that really launched me, as I was lucky enough to be asked back after those initial few eps, and then was given a 3 month contract, followed by 6 months and then a year. However, it doesn’t matter how ‘successful’ you are as an actor, there are always times when you will be out of work! For most of us, as soon as one job ends you immediately worry that you will never work again. But no matter how low the lows are, acting is a part of who I am inside and I could never contemplate any other career path.

I began writing my books a few years ago. I’d always written poetry, since I was a teenager, but I literally woke up one day, after a very vivid dream and thought, ‘I’ve got to write this as a book’…. and so began ‘Rosemary and The Witches of Pendle Hill’. Now, it’s like the flood gates have opened; my mind is full of ideas of things I want to write!

The spells have always been dear to me. I first got interested in tarot as a teenager and did a course on how to read cards. Since then, I have followed the path of Wicca which is a form of paganism that celebrates nature and the circle of the natural world. Many of the festivals (or sabbats as we call them), follow the same pattern as the holidays we celebrate in the UK, for example: Beltane (may day), Yule (winter solstice) ,  Litha, (Summer solstice), Samhain, (Halloween). You do not have to cast spells to be a Wiccan, the two are not mutually exclusive. And contrary to popular belief Wicca has nothing to do with black magic or satanism. In Wicca our rule is ‘harm ye none’. You only cast spells for the greater good; if you attempt anything dark or unkind it will come back on you threefold, so its just not something we do. That kind of ‘magic’ is dark and unsavoury and linked to the devil. We are not devil worshippers! I started making my own spell kits in 2011 and selling them at psychic fayres. I’ve met some wonderful people on the way and have enjoyed being able to give people something that will often help them refocus and give them the tools and encouragement to change their lives for the better. I hope you enjoy browsing the website.